Finger millet (Eleusine coracana), also known as ragi or mandua, is one of the oldest food grains known to humankind. In Jharkhand, it is consumed mostly as pancakes, particularly during the winter season. Because of a high degree of drought tolerance and resilience to climatic change, finger millet is extensively grown in almost all the 24 districts of Jharkhand. The crop is of particular importance to the South Eastern Plateau (agro-climatic sub-zone VI) comprising of the districts of East Singbhum, Saraikela, and West Singbbhum. During the last few years, there has been an overall increase, although with marked year-to-year variation, in the area and production of finger millet in the state. In 2012-13, the area under finger millet cultivation in Jharkhand was 12,555 ha, and the production was 842.37 MT. The area and production increased to 22,692 ha and 20,025 MT, respectively, in 2016-17. The productivity of the crop, however, increased only slightly from 842.37 kg/ha in 2012-13 to 882 kg/ha in 2016-17. This is because a majority of the farmers in Jharkhand grow traditional cultivars with low yield potential and genetically non-uniform seeds.

Table: Year-to-year variation in area, production, and productivity of finger millet in Jharkhand 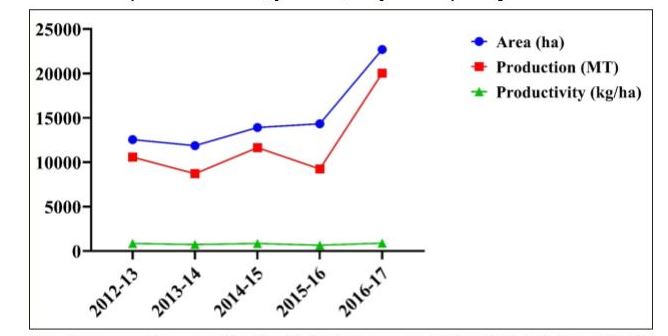 The grains of VL Mandua 352 are mineral-rich and contain protein 7.01%, iron 3.30 mg/100g, zinc 1.43 mg/100g, and calcium 329.67 mg/100g in its edible portion. Early maturing VL Mandua 352 well suits the rain-fed ecology of Jharkhand, where delay in monsoon and drought is a common phenomenon. During the year 2020-21, we have provided 5.5 q of quality seeds to more than 150 farmers belonging to Ranchi, Khunti, Gumla, Ramgarh, and Hazaribag districts of Jharkhand. With the recommended seed rate of 10 kg/ha, the seeds provided to the farmers shall be enough for cultivation in 55.0 ha of land.

The pre- and post-harvest operations, including intercultural operations, threshing, and pearling in finger millets are highly cumbersome. The traditional methods of these operations are highly inefficient, time-consuming, and uneconomical. Regarding this, we are introducing light-weight VL metallic hand tools for smooth intercultural operations, and Vivek Millet Thresher-cum-Pearler, to the mandua growers of Jharkhand. A total of 198 tool kits containing the metallic hand tools and 20 units of Vivek Millet Thresher-cum-Pearler will be provided to the farmers on an individual/cluster-basis.

The machine possesses a threshing and pearling capacity of 30-35 kg grain/hr and 45 kg grain/hr, respectively. The machine can work with household power supply and do not cause any pollution. This

intervention will be highly effective in terms of working efficiency, saving time and energy, and reducing drudgery. Moreover, it will reduce the labor requirement. The mechanization of threshing and pearling processes would enhance the output and the quality of the products, which are prerequisites for any commercial intervention. With a long-term plan to create a finger millet-based entrepreneurship ecosystem in the state, we plan to introduce white-grain finger millet also from ICAR-VPKAS with a high processing value and more attractive end-use products. We also intend to train rural youths to develop finger millet-based products like biscuits, noodles, pasta, cakes, etc. We expect that these interventions would enhance the productivity of finger millet in the state, open links to markets, and help to secure the health of the small and rural farmers.