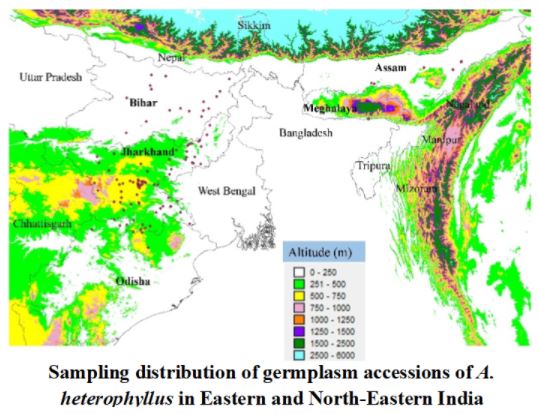 Artocarpus heterophyllus, commonly known as jack or jackfruit, is a multiuse tree species in Moraceae. The species is indigenous to the Western Ghats of India and the Malaysian rainforests. Various parts of the tree, including leaves, green and ripe fruits, seeds, etc., are used as food or fodder. Also, jack is a potential tree for the pharmaceutical, biomaterial, paint, and food industries. As systematic commercial exploitation of this tree is not common, it has received little attention for improvement using modern breeding techniques such as marker-assisted breeding.
SSR markers are known for their usefulness and ease of use in genetic and genomic studies and marker-assisted breeding. A group of researchers led by Dr. Binay K. Singh of ICAR-Indian Institute of Agricultural Biotechnology identified a set of 16,853 unigene-based perfect SSRs in A. heterophyllus. Thirty-eight highly polymorphic SSRs from the set was used to study the genetic diversity and population structure of 224 accessions from three agro-climatic zones in India (maintained at the Ranchi Regional Station of ICAR-NBPGR, New Delhi). The 38 SSR loci produced an average of 3.7 alleles per locus. The Neighbour Joining (NJ)-based clustering grouped the germplasm into three main clusters, each with three subclusters. However, distinct agro-climatic zonal groupings were not observed. Anthropogenic factors and a long cultural association of jackfruit with the population leading to a wide movement of seeds/propagules across the zones may be the factors for such genetic homogeneity among the groups. However, the study opened new avenues for more extensive research in the future, concluded the research group.
Read the full paper at https://doi.org/10.1016/j.ecolind.2021.108143
(Compilation: Devendra K. Singh & Ranjeet K. Singh)